“Fair is the place I have here by the sea.” 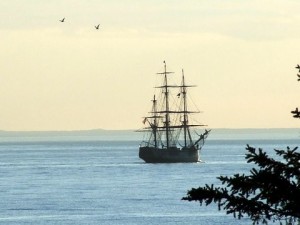 Michael “Mor” MacDonald, one of the first pioneers to settle on the southwestern coast of Cape Breton, wrote this about his first winter there.  A poet and sea captain from South Uist, Scotland, he arrived on the shores of Judique in 1775 and built a shelter at a location where the Celtic Shores Coastal Trail passes today.  He spent that first winter under the curious eyes of the Mi’kmaq at Indian Point just across the pond. A cairn erected in 1975 commemorating pioneer Michael MacDonald reads:

“In commemoration of Michael MacDonald, pioneer settler….. and of his intrepid compatriots, to whom this community owes its noblest and most enduring traditions.”

A little over a century later the I & R Railway Company was incorporated to construct a railway from Tupper Junction near Port Hawkesbury to Broad Cove near Inverness.  This is the exact route of the famed Judique Flyer- a coal fired steam train that ran the sixty mile rail line and carried residents, visitors, soldiers and all the necessities of life to the communities along the rail line.  Many senior residents hold vivid memories and recall stories of characters and events that occurred on that daily train run decades ago.  These memories and stories that were passed  on  hold enduring traditions for our communities.

The rail line was eventually abandoned but the connection this route provided for our communities remained.  For over two decades, volunteers developed this abandoned rail line into the trail that is here today, which is also part of the Trans Canada Trail and the International Appalachian Trail.  In 2008, five  trail sections were opened including The Ceilidh Coastal Trail, Judique Flyer Trail, Chestico Trail, Mabou Rivers Trail and Inverness Shean Trail.  Today, these trails are collectively known as the Celtic Shores Coastal Trail.

The trail before you today is steeped in history and surrounded by a picturesque and captivating coastline, wetlands and waterways teaming with waterfowl and connects vibrant communities  that continue to celebrate the enduring traditions of our ancestors.  As proud volunteers, our hope is this trail will provide enduring traditions for future generations of residents and visitors to our fair home.

A heartfelt “Thank You” to all the donors, funding partners, supporters, our volunteers  and most of all the trail users who validate the trail’s development. Without all of you, none of this would be as grand!